Home » Salty, Woody and Spicy, This New Fragrance Was Inspired by a Little-Known European Island

Salty, Woody and Spicy, This New Fragrance Was Inspired by a Little-Known European Island

Growing up in Paris, fifth-generation perfumer Ben Krigler had never heard of the German island of Sylt before relatives took him there on holiday when he was a child. “I really wasn’t sure where we were at all—it felt like such a faraway place,” he remembers. Since then, he’s become more familiar—and enamored—of this getaway he calls “a mix between the urban and the wild.” So much so that this month, the 118-year-old Krigler perfume house has launched Sylt Style 2202, a limited-edition fragrance inspired by this island in the North Sea’s Frisian archipelago. Over six years in the making and crafted using primarily natural ingredients, the scent, Krigler says, is “like the island itself: discreet. The opulence is hidden and gets revealed in layers.”

Because while Sylt has long been a favorite destination for the one percent of Northern Europe—it’s often referred to as “the Martha’s Vineyard of Germany”—it “still feels like a secret from the rest of the world,” Krigler notes. “It’s not Saint-Tropez.” The perfumer recalls the island’s profile increasing a bit when Karl Lagerfeld—a Hamburg native who grew up vacationing on Sylt—started doing photo shoots there during his days at Chanel and then recreated its beaches (complete with beach huts and a jetty) for one of his last fashion shows with the house before his death in 2019. But still, Krigler says, the destination retains its relaxed charm. “People go there to see and be seen, but in a low-profile way. It is a place where the average home starts at around five million euros [about $6 million], people fly in on their private jets and where fresh lobster is the typical dish—but it’s also a place where everyone’s wearing shorts and where you’ll find sheep grazing freely just feet from the Gucci and Hermès boutiques.”

It’s this interesting mix of sophisticated and untamed that inspired Sylt Style 2202, which Krigler describes as feeling like “the cashmere blanket you throw on after a day at the beach, on the way to meet friends for a glass of champagne.” While most scents that launch in the summer tend to be heavy on florals or citrus notes, Sylt Style is a cocooning mix of salty, woody and spicy that evokes a place that’s sunny and dry during the day but cools off at night, similar to the US West Coast.

The island’s plant and animal life, the hemp roofs of its traditional houses, and its fusion history—from a Viking past to a current Namibian community—are also reflected in the notes. Ingredients include Peruvian pink pepper, vanilla from Reunion Island, Italian almond, amber, hazelnut, tree moss, Spanish orange, incense and ginger—the latter to represent the fresh, green notes of the ocean. The resulting mix is left to marinate for over three years, giving the scent time to age like a fine wine, then hand-poured into no more than 1,400 bottles a year. 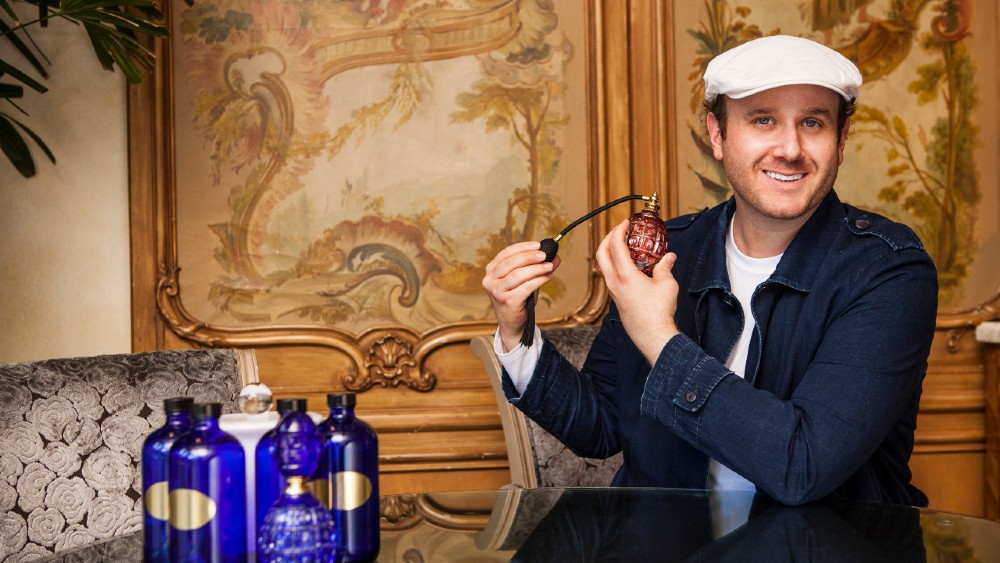 Finding inspiration in a locale is nothing new for the House of Krigler, which is known as the parfum de voyages. “We tell the story of travel—it’s in our DNA,” says Krigler. Founded in Berlin in 1904 by Albert Krigler (Ben’s great-grandfather), then later based in the South of France, the brand has over 600 fragrances in its archives, and many evoke beloved destinations—such as Mont Suisse 67, Jazzy Riviera 210 and Palm Dream 219 (after Palm Beach)—or were the signature scents of globetrotting fans including F. Scott Fitzgerald, Audrey Hepburn, King Hussein of Jordan and Catherine, Duchess of Cambridge.

Krigler opened its first boutique in the 1930s in New York City’s Plaza Hotel, and since then, the scents have been sold exclusively at five-star hotels around the world (and, more recently, online). Retail outposts have recently opened at the Peninsula Chicago and the Ritz-Carlton, San Francisco, and Sylt Style 2202 will also launch at Sylt’s boutique Walter’s Hof Hotel during the annual midsummer night festivities, June 20 to 22. If the scent is sold out at your closest shop, you can add your name to the waiting lists Krigler keeps in its stores for most of its fragrances; the wait time is typically around six months. Sylt Style 2202 is $515 per 3.4-ounce bottle.