While long lines, safety concerns and uncertainty over rules may be part of the reality of voting in 2020, two Los Angeles-area luxury hotels are aiming to do their part by making the process more comfortable. From October 30 to November 3, the historic Hotel Figueroa in downtown and the recently revamped Four Seasons Hotel Westlake Village will both serve as official polling places for this year’s election, allowing eligible voters to do their civic duty in style—and then stick around to enjoy the facilities.

When it first opened in 1926, Hotel Figueroa was notable for being the largest project of its kind in the US to be financed, owned and operated by women. Since then, it has continued its commitment to women’s empowerment, from serving as the location for generations of women’s club meetings to showcasing the works of emerging female artists. Now, in honor of the 100th anniversary of women receiving the right to vote, the hotel has stepped up to serve the community in a new way by welcoming registered LA County residents to cast their ballots in its historic Gran Sala Ballroom.

“We were inspired by our hotel founders, a group of trailblazing women who intended these walls to be a haven for free political discourse and artistic expression,” says Connie Wang, managing director of Hotel Figueroa. “We know the right to vote and participation in the election process is foundational to our democracy, [and] we are humbled to be able to offer a safe space to help facilitate socially distanced voter turnout and engagement during this historic election.”

To that end, the Gran Sala will be outfitted with a lounge where poll workers will scan IDs, and physically distanced polling booths equipped with iPad-based voting systems. As one of California’s first Clean + Safe Certified hotels, the property will ensure that strict health and safety protocols are in place, including the use of masks and hand sanitizers. After casting their ballots, voters will receive a special hotel-designed “I Voted” sticker, and are welcome to stay on property to enjoy contactless dining at the poolside Veranda Al Fresco restaurant (open from 12pm-9pm during the five days of voting; to-go options are also available).

Over in the Westlake Village neighborhood, Four Seasons’ popular urban resort is spread out over 12 acres that feature tranquil gardens, walking paths and indoor and outdoor pools. Renowned for its wellness programming (which includes the integrative services offered at the on-site California Health & Longevity Institute), the hotel recently emerged from a re-do that revealed three new restaurants, revived accommodations and re-designed event spaces. Among the latter is a 6,000-square-foot studio sound stage with high-tech production capabilities that’s usually used for splashy functions—but for the next few days will, for the first time, serve as a polling station. 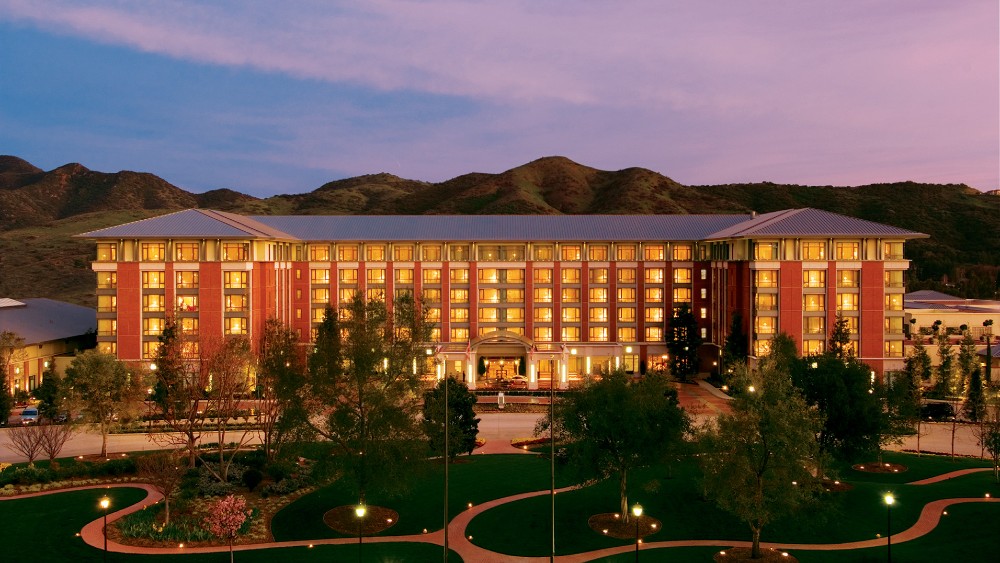 “It is our great honor to participate in the democratic process by hosting an official election center,” Robert Cima, regional vice president and general manager, said in a statement about the program. Hotel manager Richard Poskanzer added that while “November is full of big decisions, the easiest decision to make is to visit our hotel. Our Four Seasons team is ready to help you rest and relax as you await the outcome of this important election.”

Voters who would like to cast their ballots in person will be directed to join a socially distanced line to enter the studio; masks will be required once inside, and complimentary self-parking will be available. Those who would rather stay in their cars can take their mail-in ballot to the official curbside voting/ballot drop-off location set up at the back entrance to the hotel. Once you’ve done your civic duty, stick around to stroll the grounds or enjoy a meal on the patio at the Coin & Candor brasserie. Plan ahead and book an outdoor massage or reserve a poolside cabana—or relieve Election Night anxiety by checking in to one of the plush new rooms.

The polling locations at both hotels will be open from 10am-7pm between October 30-November 2, and from 7am-8pm on November 3. Find more details on the Los Angeles County voting site.