Home » Locked Inn: What It’s Like to Spend Two Weeks of Mandatory Quarantine in a 5-Star Hotel

Locked Inn: What It’s Like to Spend Two Weeks of Mandatory Quarantine in a 5-Star Hotel

When my family moved to Australia from South America in the early 1970s, like many new arrivals to the country, including some of the members of AC/DC, we spent the first 21 days at the Villawood Migrant Hostel on the western outskirts of Sydney.

I have only bad memories of the experience—particularly the food, most of which my mother and I refused to eat. I was just 7 at the time, but more than a little precious (a little voluptuary-in-training-heels, if you will.) To this day, I detest gravy, which was seemingly slathered on everything. And don’t get me started on Vegemite. My already low opinion of the place worsened over the years, especially when it was converted into a controversial migrant detention center that remains operated by a private prison company.

So it was with plenty of apprehensions that I decamped last month from New York to Sydney, in the knowledge that, per Australian immigration protocol during the coronavirus pandemic, I would have to enter government-arranged quarantine for 14 days, destination unknown. It didn’t help that when I told a friend in Sydney of my imminent return, he laughed, adding, “Enjoy your time in hotel prison.”

Subsequent Google searches, pointing to multiple stories of disgruntled travelers complaining about it being worse than jail, didn’t help. Nor did the sight, after 26 grueling hours of travel without coffee or alcohol, of a welcome committee consisting mostly of federal policemen in army fatigues. After clearing immigration and customs, having our temperature taken by masked nurses and being asked whether we had symptoms of Covid-19 (I didn’t), my fellow travelers and I (a ragtag posse of Aussie citizens returning home thanks to a temporary travel reprieve brokered between the airlines and the Australian government) were escorted through the empty terminal and onto airport buses.

Once on board, we were now under the jurisdiction of state police and not the dour men in camouflage. We were all exhausted, ready for a meal and a shower, and some much-needed sleep. We were also curious where we were being sent. I had read varying accounts of people being quarantined in accommodations ranging from five-star hotels to Holiday Inns and even exurban boarding houses. A half-hour went by, then another, without any update, until—almost two hours after our arrival—we finally got the okay to depart. Our destination, we were informed, was the Sofitel Sydney Wentworth, a five-star luxury hotel in the central business district.

A huge relief—unless you grew up in Australia. For the uninitiated, Wentworth is not only the surname of a famous local explorer and politician, after whom the street that the Sofitel is located on is named, but also the fictional women’s prison in the groundbreaking 1980s Australian television drama Prisoner (known as Prisoner: Cell Block H outside Australia). As we drove the 30 minutes into the CBD, scenes from Prisoner came to mind like so many flashbacks from my teenaged years: inmates bribing the guards, or “screws,” as they were referred to on the show, with contraband cigarettes (luckily I had some in my suitcase); brutal punishments, meted out by inmates and screws alike; slop that passed for food, sometimes containing ground glass.

Fortunately, check-in at the hotel was brisk and friendly, and there was no cavity search to speak of. I was taken to my room on the 15th floor: a junior suite with towering views of the city and the grand courtyard below—the site of the Garden Court Restaurant, one of the best French bistros in town, and an outdoor bar popular in the Before Times with the city’s young sophisticates. The rooms at the Wentworth speak in a thick French accent, right down to the magnifique bed linen and Balmain toiletries. After unpacking, and trying out the king-size bed for comfort (the girls in Prisoner never had it so good), at around 9:30pm I called down to see what the deal was with dinner.

I was told that dinner was usually served at 6pm but something was being cobbled together and sent up promptly. For the next two weeks, however, I would be able to order from a menu and have my choices delivered to my room three times a day. (Trash would be picked up after dinner and linens swapped at the end of the first week.) As for alcohol, I could order from the minibar menu—however, there was a strict limit of one bottle of wine or three beers a day per person, no exceptions. I ordered a bottle of white wine and eagerly awaited my meal. About an hour later I heard a faint knock and opened it to discover a plastic bag outside my door. The hotel staff was expressly prohibited from entering the room, just as I was from leaving it (or risk fines and actual jail time), but when I saw the sad turkey sandwich that had been left behind, the type that you might get on a budget domestic flight, I figured the person who delivered it had bolted out of shame more than duty.

I’m a shocking insomniac at the best of times but I somehow managed to get about four hours sleep that first night. It might have been the Ambien, but I’m pretty sure I dreamt about the tuna rigatoni at Novitá, one of my favorite spots in New York, and woke up hungrier than a prisoner with lost commissary privileges. Unfortunately, breakfast and lunch proved to be as unappetizing as the previous night’s fare (I’ve had better on Aeroflot). But, in the information package given to us on arrival, I discovered that we were able to order delivery from outside, including alcohol, and have friends leave care packages at reception to be carefully examined for banned substances. I decided to take matters into my own hands. 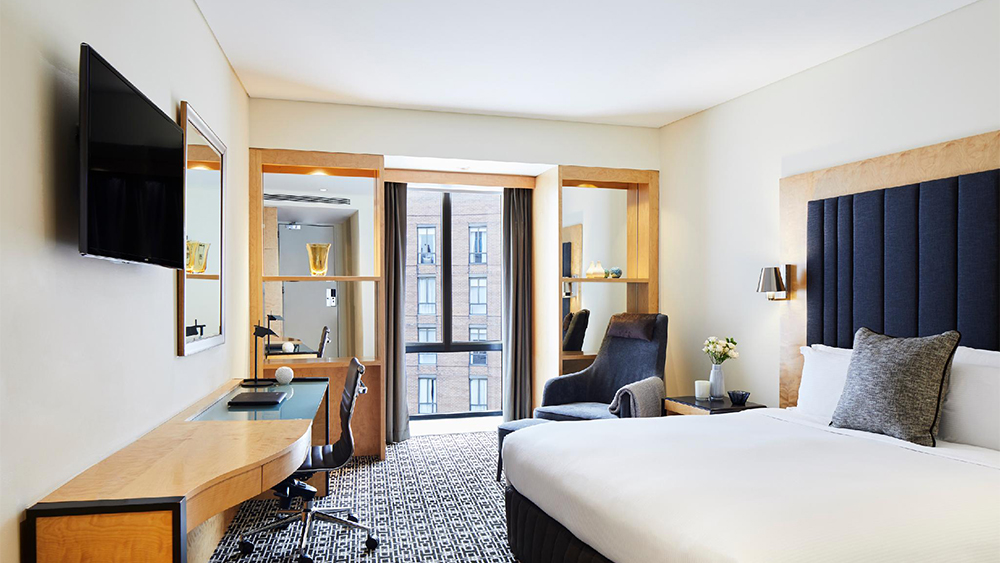 I reached out to friends and family who, bless them, delivered copious amounts of fruit, gorgeous nibbly bits, fresh juices and drinks, including a large bottle of iced tea that tasted remarkably like Macallan Triple Cask 18-Year-Old Whisky. Go figure. For a weekend of Zoom catch-ups with friends in Sydney and New York, one bon vivant came through with some much-needed Champagne, Beluga caviar and cheeses from Simon Johnson Providore, a purveyor of high-quality Australian and imported foodstuffs. Another coughed up the perfect selection of books to while away the time.

Not that I was stuck for things to do. I had a lot of writing work on my plate so I viewed the two weeks as a five-star writer’s camp. And free to boot. (It should be noted that in the past week, the Australian government announced that returning citizens will now be charged AUD$3,000 for their quarantine stay, drinks not included.)

Sure, I would love to have been able to open a window for some fresh air or a cigarette, stretch my legs in the courtyard or—entre nous—use the gym. But there were countless Australian television shows to feast on, including Wentworth, a prequel of Prisoner now in its seventh season on Netflix. And as a last resort, I had some mindfulness apps that I downloaded and often thought about doing, which to my mind is a form of meditation. On the last Saturday night, there was even a socially distant dance party, organized by a DJ and singer who happened to be quarantining at the same time, to distract me for a few hours. Detainees were encouraged to log onto Instagram at a given time and dance our little hearts out at our windows. I take it most of my fellow travelers weren’t big on house music as the desultory moves on display suggested that everyone was listening to different songs.

For those rare moments when my friends were unavailable for a chat and the sight of other humans, however distant, didn’t suffice, there was a nurse and a mental health practitioner who checked in on us daily. Well, at least the nurse did, right until the day I was cleared to leave. The mental health specialist told me after the third day that it sounded like I was really on top of things and needed no support, but to call her in the event that I needed someone to talk to. I didn’t have to heart to tell her that I was on my third glass of, ahem, iced tea.